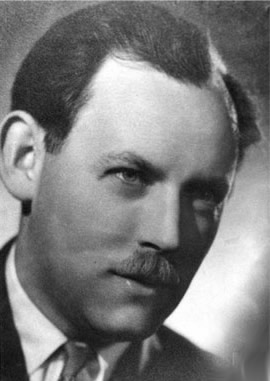 During World War Two, a small group of militant Zionist activists from Europe and Palestine came to the United States to seek support for the rescue of Jews from the Nazis and establishment of a Jewish state. They created a series of political action committees which were collectively known as the Bergson Group, after their leader, Hillel Kook, who used the alias Peter Bergson.

Bergson and his fellow-activists were members of the Irgun Zvai Leumi, a Jewish underground militia in Palestine and followers of Vladimir Ze’ev Jabotinsky, leader of Revisionist Zionism. During 1937-1940, they were active in the Irgun’s aliyah bet (unauthorized immigration) effort, which smuggled an estimated 20,000 Jews from Europe to Palestine. One of Bergson’s comrades, Yitshaq Ben-Ami, came to the U.S. in 1939 and established the American Friends of a Jewish Palestine, to seek support for the immigration campaign.

In 1940, Bergson came to the U.S., as did his associates Samuel Merlin, Alex Rafaeli, Arieh Ben-Eliezer, and Eri Jabotinsky. Together with Ben-Ami, they transformed the American Friends group into the Committee for a Jewish Army of Stateless and Palestinian Jews.

For the next two years, the committee lobbied for the creation of a Jewish armed force to fight alongside the Allies against the Nazis. The Jewish army committee employed a protest tactic that was unheard of in the American Jewish community at that time, the placing of full page advertisements in major daily newspapers. The ads displayed the names of numerous prominent political figures, intellectuals, and Hollywood celebrities who supported the Jewish army cause. The Bergson Group’s newspaper ads, rallies, and lobbying in Washington, combined with behind the scenes efforts by the established Jewish organizations, eventually persuaded the British to establish the Jewish Brigade, an all-Jewish military unit that was part of the British army.

When news of the mass murder of European Jewry was confirmed by the Allies, in late 1942, the Bergson Group shifted its focus to the rescue of Jews from Hitler. The group’s new action front, the Emergency Committee to Save the Jewish People of Europe, challenged the Roosevelt administration’s position that nothing could be done to aid the Jews except winning the war. The committee built an ecumenical coalition for rescue, which included cultural celebrities, members of Congress, African-American leaders, and many others. The Emergency Committee sponsored more than two hundred newspaper ads, held rallies, lobbied on Capitol Hill, and organized an unprecedented march by four hundred rabbis to the White House shortly before Yom Kippur in 1943. These efforts culminated in the introduction of a congressional resolution urging creation of a U.S. government agency to rescue refugees. The pressure from Congress, combined with the efforts of Treasury Secretary Henry Morgenthau, Jr. and his aides, persuaded President Franklin D. Roosevelt to establish the War Refugee Board. In the final fifteen months of the war, the Board played a major role in saving more than 200,000 refugees.

The Bergson Group also created two action committees to lobby for Jewish statehood: the American League for a Free Palestine (est. 1943), to mobilize American public support for Jewish statehood, and the Hebrew Committee of National Liberation (est. 1944), which claimed to serve as a government-in-exile for the Jewish rebels in British Mandatory Palestine and those European Jews seeking to reach the Holy Land. Both the American League and the Hebrew Committee supported the Irgun Zvai Leumi, a Jewish underground militia in Palestine led by Menachem Begin.

The Bergson Group’s activities angered many mainstream Jewish leaders. They feared the group’s successes were upstaging their own positions of leadership, and worried that boisterous Jewish protests might provoke antisemitism. Bergson’s opponents helped bring about U.S. government investigations of the group, which did not find grounds for prosecution but did hamper its effectiveness to some extent. Attempts by Bergson’s rivals to persuade the U.S. and the British to draft or deport Bergson were unsuccessful.

The Bergson Group played an important role in reshaping American Jewry’s agenda during the Holocaust era, influenced some mainstream Jewish leaders to adopt a more activist approach, and contributed significantly to the creation of the Jewish Brigade and the War Refugee Board. Although the Bergson Group’s leaders were foreigners who arrived in the U.S. with scant knowledge of American political culture, they quickly built a protest movement that successfully navigated the U.S. political system and brought about a significant change in America’s refugee policy during World War II. The Bergson Group’s activities also influenced subsequent generations of American Jewry. The protest tactics which it pioneered soon became commonplace among mainstream Jewish organizations. In later years, American Jewish activists for Soviet Jewry and Israel cited the Bergson Group as the inspiration for their own activism.

OUR SPONSORS
The David S. Wyman Institute for Holocaust Studies is grateful to the members of our Sponsoring Committee, whose generosity has made this photo exhibit possible: