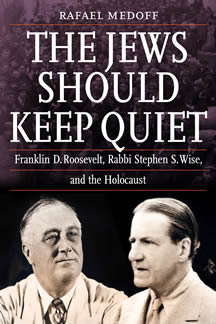 President Franklin D. Roosevelt actively sought to silence Jewish critics of his refugee policy, according to the new book The Jews Should Keep Quiet, by Dr. Rafael Medoff.

The book looks at America’s response to the Holocaust through the prism of FDR’s controversial relationship with the nation’s foremost Jewish leader, Rabbi Stephen S. Wise.

The book has been published by the Jewish Publication Society of America / University of Nebraska Press and can be ordered by clicking here.

Utilizing newly discovered documents  about the president’s private conversations with Rabbi Wise and other Jewish leaders, Dr. Medoff shows how FDR manipulated Wise and exploited the Jewish community’s insecurities in order to stifle American Jewish criticism of US immigration policy—even using the FBI and the IRS to intimidate Jewish critics. The book’s title is derived from a previously unknown remark that Roosevelt made to Wise.

—  The Jews Should Keep Quiet confronts a tragic and often misunderstood chapter in American and Jewish history. Taking into account the challenging political and social climate of the period, Dr. Medoff explores the dilemmas faced by Rabbi Wise and other leaders of American Jewry, and the realistic options for rescue action by the Roosevelt administration which, if taken, could have saved many Jewish refugees.

The Jews Should Keep Quiet delves into these and other difficult truths: — FDR went out of his way to suppress immigration far below the limits set by US law, and refused to admit Jewish refugees to the Virgin Islands even after the local government there offered to open the doors.

— Roosevelt strove to maintain cordial—sometimes even friendly—relations with Nazi Germany prior to World War II, by sending US representatives to Nazi rallies, censoring anti-Hitler remarks by a cabinet member, and helping the Nazi regime evade American Jewry’s boycott of German goods. — The Roosevelt administration dismissed proposals to use available Liberty ships to bring refugees to America, even as those ships were returning empty from Europe.— Behind the scenes, FDR undermined efforts to create a Jewish state in Palestine, and instead promoted a plan to “spread the Jews thin all over the world.”

— The administration rejected pleas to drop bombs on the railways leading to Auschwitz, even while American planes were bombing targets just a few miles away.

Dr. Medoff also explores the sensitive question of FDR’s private sentiments toward Jews. Unmasking the strong parallels between Roosevelt’s statements regarding Jews and Asians, he reveals the surprising connection between the president’s policy of excluding Jewish refugees and his mass internment of Japanese-Americans.

This is the tragic but compelling story of America’s most famous rabbi, torn between his support for President Roosevelt and his agony over FDR’s abandonment of the Jews during the Holocaust—and the story of a revered American president who manipulated Jewish leaders in order to silence criticism of his policies.

What They’re Saying about The Jews Should Keep Quiet—“This highly original work addresses the U.S. government’s unwillingness to undertake serious rescue efforts and the deep divisions within American Jewry over how to respond to U.S. indifference to European Jewry’s plight. Expanding on David S. Wyman’s pathbreaking work on America’s response to the Holocaust, using new archival materials and interviews with persons then on the scene, Medoff provides the best assessment to date of the relationship between America’s foremost Jewish leader, Rabbi Stephen S. Wise, and President Franklin D. Roosevelt.”

— Professor Stephen H. Norwood, author of The Third Reich in the Ivory Tower and coeditor of Encyclopedia of American Jewish History

—“The Jews Should Keep Quiet reveals in troubling detail how FDR manipulated American Jewish leaders to suppress criticism of his abandonment of Europe’s Jews during the Holocaust. Our family was certainly impacted. I was two years old on January 30, 1933, the day Hitler became Reichschancellor and my Dad told my Mom: ‘We are leaving Germany forever.’ It took us two and a half years of seeking a sympathetic American consul to overcome the barriers of FDR’s State Department. We need to learn from Rafael Medoff’s disturbing but necessary and enlightening study of moral failure and its consequences.”

— “The Jews Should Keep Quiet conclusively documents, far better than anything else I have read, how Franklin Delano Roosevelt’s private attitude towards Jews motivated him to close America’s doors to Jewish refugees from Nazi Germany. Medoff adroitly exposes how FDR suppressed Jewish immigration with the unwitting assistance of Rabbi Stephen Wise. This book is a revelation—courageous, scholarly, and chillingly honest. You will never think of FDR the same way again after reading it.”

— Irving Abella, president of the Academy of the Arts and the Humanities of Canada, and past Shiff Professor of Jewish Studies at York University, Toronto

— “The Jews Should Keep Quiet is of lasting importance for the teaching and understanding of the Holocaust. Rafael Medoff’s incisive examination of the complex relationship between the U.S. president and America’s foremost Jewish leader shines a light on troubling aspects of American history that many would prefer to ignore. This book is must reading.”

— “The Jews Should Keep Quiet is a cautionary tale about the pitfalls of elite complicity with government inaction. Rabbi Stephen S. Wise regarded Franklin D. Roosevelt as a friend, even though the Roosevelt administration was unfriendly to the plight of Jewish refugees, opposed the bombing of extermination camps, and remained ambivalent toward Zionism. Meticulously researched, engagingly written, and eminently fair-minded, The Jews Should Keep Quiet deserves a wide audience.”

— Dean J. Kotlowski, professor of history at Salisbury University and author of Nixon’s Civil Rights and Paul V. McNutt and the Age of FDR

— “In this important volume, Medoff shows there was a great deal Roosevelt could have done despite the political circumstances and limitations. The new material and analysis he brings to light are vital study in a field rife with apologetic, consensus historians—and dare not to be forgotten.”

— “The Jews Should Keep Quiet is a meticulously researched and disquieting history of the reasons behind America’s failure to rescue Europe’s doomed Jews. Readers may rightly conclude that if there is a Roosevelt they can admire, it is Eleanor and not Franklin.”