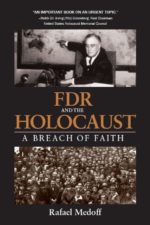 President Franklin Roosevelt was admired as a humanitarian–yet he shut America’s doors to Jews fleeing the Holocaust. He called himself the champion of “the forgotten man,” but when it came to the Jews under Hitler’s jackboot, FDR turned away.

Medoff’s groundbreaking research has uncovered documents revealing FDR’s private opinions about Jews–shocking new evidence that pulls back the curtain on why he refused to admit refugees or bomb the railways leading to Auschwitz.

This gripping historical account of the real story of President Roosevelt’s record on the Holocaust is a stunning expose of how FDR could have saved many innocent lives, yet chose not to.

Comments by scholars and Jewish leaders on FDR and The Holocaust: A Breach of Faith:

“The controversy over FDR’s bystanding during the Holocaust continues–as it should. Despite some efforts to justify Roosevelt’s behavior, the moral failure demands a full reckoning. In this book, Rafael Medoff gives us important treatments of various actors in the processes which led to Roosevelt’s actions and inactions. The volume is enriched by new documents and new reflections. This book should be read and taken seriously by everyone who is concerned with why President Roosevelt came up so short in dealing with the most total crime of genocide in history.”

“FDR has been lionized–and for good reason. From the New Deal to victory in World War II, he proved himself one of history’s great world leaders. But did he do all he could to save the Jews of Europe during the Holocaust? In his excellent new book FDR and the Holocaust, Rafael Medoff reveals new and compelling research that sheds important light on this question. In the tradition of David S. Wyman’s monumental The Abandonment of the Jews, Dr. Medoff confronts some hard realities that are sure to make people rethink their assumptions about FDR’s response to the Nazi genocide.”

“This book provides new and devastating revelations about the extent and depth of antisemitism among Franklin D. Roosevelt, several of those closest to him, and the State Department, and how it shaped U.S. refugee policy during the Holocaust. Dr. Medoff expands on David S. Wyman’s pathbreaking work, exposing the roots of the Roosevelt administration’s weak response to the lethal threat to European Jewry, from 1933 through the Holocaust. FDR and the Holocaust: A Breach of Faith is particularly relevant today at a time of widespread denial of, and indifference to, intensifying global antisemitism.”

“For those who think of FDR as a friend and hero of American Jews, Dr. Rafael Medoff’s well written and documented expose of Roosevelt’s failure to attempt to rescue European Jewry from the Holocaust, is a reminder that Jews in America must never be afraid to speak truth to power.”

–Seymour Reich, chairman emeritus of the Conference of Presidents
of Major American Jewish Organizations and the International
Catholic-Jewish Commission (on the Vatican and the Holocaust)

“Rafael Medoff’s superbly important, well-researched, and fascinating new book reveals the painful truth of what really happened when Jewish leaders met with President Roosevelt–what he knew, when he knew it, and why his reaction to the Holocaust was so pitifully inadequate.”