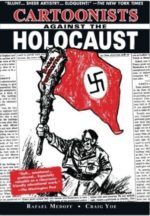 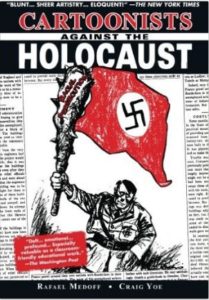 Washington Post on
“Cartoonists Against the Holocaust”
If you ever question the power of a well-crafted political cartoon, here — through an emotional 200 pages — is a profound antidote to your doubt.

“Cartoonists Against the Holocaust,” a deft, new collection from Rafael Medoff and Craig Yoe, not only taps the undeniable force of these dark yet illuminating cartoons, but also goes behind the lines to humanize the minds behind the work.

Such political-cartooning greats as Rollin Kirby, “Ding” Darling and the Baltimore Sun’s Edmund Duffy are on prominent display here, as well as early Seuss and future Post legend Herblock. But especially affecting are the personal stories of cartoonists Eric Godal and Arthur Szyk, both of whom lost parents to the Nazi death camps.

“Cartoonists Against the Holocaust,” divided into 43 chapters with text as context, is especially valuable as a classroom-friendly educational work, as the scores of cartoons provide the most direct, affecting window into a world turned upside down.

During the dark days of the Holocaust, a small number of American political cartoonists used their art to cry out against injustice—and to try to inspire the public to demand the rescue of Hitler’s victims.

“Cartoonists Against the Holocaust” brings back 150 of these amazing cartoons, together with scores of compelling period photographs that place the cartoons in context. We can see the Nazi genocide and the world’s response as they unfold, through the eyes of some of America’s most famous cartoonists, including the beloved Dr. Seuss, the “Washington Post’s” “Herblock,” and many others including numerous Pulitzer Prize winners. “Cartoonists Against the Holocaust” is a unique way to learn about the Holocaust—and a journey back in time to an era that we dare not forget.

Dr. Rafael Medoff is founding director of The David S. Wyman Institute for Holocaust Studies in Washington, D.C., and author of 15 books about Jewish history and the Holocaust. Craig Yoe is an Eisner Award-winner and a noted historian of cartoons and comics. Yoe has been called the “genre’s master archeologist” by “USA Today.” He has edited nearly 100 books in the field.