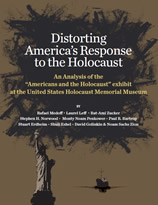 U.S. Holocaust Museum Distorts FDR’S Record
A study by eight leading Holocaust historians has found that a new exhibit at the United States Holocaust Memorial Museum distorts and minimizes President Franklin D. Roosevelt’s abandonment of Jewish refugees during the Holocaust.
The study, titled “Distorting America’s Response to the Holocaust,” is a comprehensive analysis of the museum’s recently-opened exhibit, “Americans and the Holocaust.”
(PDF Download)

State Dept Historian Rewrites Holocaust Record
A scholar in the State Department’s Office of the Historian has authored an essay defending U.S. consular officials who rejected visa applications from Jewish refugees in Vichy France in the 1940s, and minimizing the accomplishments of Hiram Bingham IV, a dissident consular official who helped Jews escape France and was punished by the State Department. 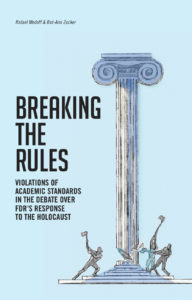 Not New, Not Evidence:
An Analysis of the Claim that Refugees and Rescue: The Diaries and Papers of James G. McDonald 1933-1945 Contains “New Evidence” of FDR’s Concern for Europe’s Jews
(PDF Download)

The Roosevelt Administration, David Ben-Gurion, and the Failure to Bomb Auschwitz:
A Mystery Solved
(PDF Download)