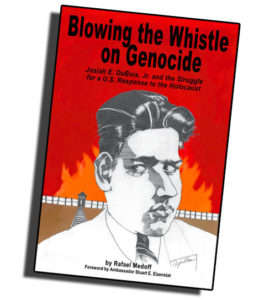 Rabbi Ellenson was a featured speaker at “They Spoke Out: American Voices for Rescue from the Holocaust,” the Wyman Institute’s sixth national conference, which was held on September 21, 2008, at the Fordham University Law School. His statement about Rabbi Wise was particularly significant because Wise was the founder and longtime leader of Hebrew Union College.

Rabbi Ellenson said that while it was “understandable” that many American Jews were afraid of provoking an anti-Semitic backlash, “Jewish leaders have an obligation to be sufficiently flexible and imaginative to deal with unprecedented situations.”

“In the early 1930s, it was Wise who led rallies against Hitler, so why did he fail so horribly in the 1940s?” Ellenson asked. He said part of the explanation lies in Wise’s “absolute and complete love for President Roosevelt.” He noted that most American Jews shared this attitude, and recalled that his grandfather kept photographs of Theodor Herzl and Roosevelt side by side as the two people he admired most.

He added that Wise’s antipathy toward Revisionist Zionist leader Ze’ev Jabotinsky and the Bergson Group, whose leaders were followers of Jabotinsky, also “helped blind him” to the need for more activism.

Rabbi Ellenson is the latest of a number of several prominent Jewish leaders who have publicly criticized the Jewish leadership of the 1940s, although his criticism is particularly significant since he was taking aim at his own predecessor, Stephen Wise. At last year’s Wyman Institute conference, New York Jewish Community Relations Council head Michael Miller and two-time Conference of Presidents chair Seymour Reich strongly criticized the 1940s Jewish leadership for undermining the Bergson Group.

Rabbi Ellenson was speaking as part of a panel focusing on three rabbinical students at the Jewish Theological Seminary (JTS) who established their own activist group in 1942-43 to raise public awareness of the Holocaust. He compared the mainstream Jewish leadership unfavorably to the student activists, saying “many of our leaders failed to response as these three heroic students did.”

The panel, chaired by JTS Professor David Roskies, also featured remarks by Rabbi Dr. David Golinkin of the Schechter Institute of Jewish Studies, JTS Rabbi Jonathan Lipnick, and Cantor Abe Golinkin, whose fathers, Noah Golinkin and Jerome Lipnick, were two of the leaders of the 1940s JTS student activists. In addition, Mishael Zion read a letter from his grandfather, Bertram “Buddy” Sachs, who was the third leader of the student group.

Rabbi Dr. Haskel Lookstein, leader of Kehilath Jeshurun and the Ramaz school, also took part in the panel. He revealed a previously-unknown episode concerning the involvement of his father, Rabbi Joseph Lookstein, in the protests that the students initiated.

The session on the JTS students was sponsored by Targum Shlishi, an Aryeh and Raquel Rubin Foundation.

The opening session of the conference launched Dr. Rafael Medoff’s new book, Blowing the Whistle on Genocide: Josiah E. DuBois, Jr. and the Struggle for a U.S. Response to the Holocaust, which has just been published by Purdue University Press.

DuBois, an unsung American hero of the Holocaust, was a young attorney in the Treasury Department who risked his career by blowing the whistle on the State Department’s sabotage of opportunities to rescue Jews from the Nazis. DuBois’s actions helped force a dramatic change in U.S. policy toward Jewish refugees, and he played a key role in the rescue of some 200,000 Jews during the last months of the war. Blowing the Whistle on Genocide is based on previously unpublished interviews with DuBois and his colleagues, as well as rare archival documents.

Keynote speaker Prof. David S. Wyman, gave an overview of America’s response to the Holocaust and the struggle between the Treasury and State departments over rescue. Dr. Rebecca Kook, daughter of Holocaust rescue activist Peter Bergson, who will discuss Bergson’s collaboration with DuBois. Session chair Richard Goodwin, a personal friend of DuBois and sponsor of numerous projects to publicize DuBois’s heroism, shared his recollections of DuBois.

Dr. Medoff, describing the process of writing Blowing the Whistle, paid tribute to political caricaturist Gerry Gersten, whose portrait of DuBois is featured on the book’s cover. Gersten, who also took part in the conference, drew the memorable caricature of FDR averting his eyes which appeared on the cover of Arthur Morse’s While Six Million Died forty years ago.

The DuBois session was sponsored by The Goodwin Foundation.

The final conference session focused on the Bergson Group’s controversial 1946 Broadway play, “A Flag is Born,” about Holocaust survivors and the fight to create Israel, which starred Marlon Brando, Paul Muni, and Celia Adler. It was one of the first postwar public events to talk about the Allies’ abandonment of the Jews.

This session, which was sponsored by Hanan and Sue Haskel, featured remarks by original cast member Steven Hill (famous for his later roles in Law & Order and Mission Impossible), Stella’s daughter, Ellen, and Celia’s son, Prof. Selwyn Freed. It was chaired by Fordham U. law professor Thane Rosenbaum, the distinguished human rights scholar, award-winning novelist, and leading member of the Wyman Institute’s Arts & Letters Council. Prof. Rosenbaum also served as Master of Ceremonies for the conference, as he has in previous years.

The conference was chaired by Sigmund A. Rolat, the esteemed philanthropist and leading builder of the Museum of the History of Polish Jewry, in Warsaw.