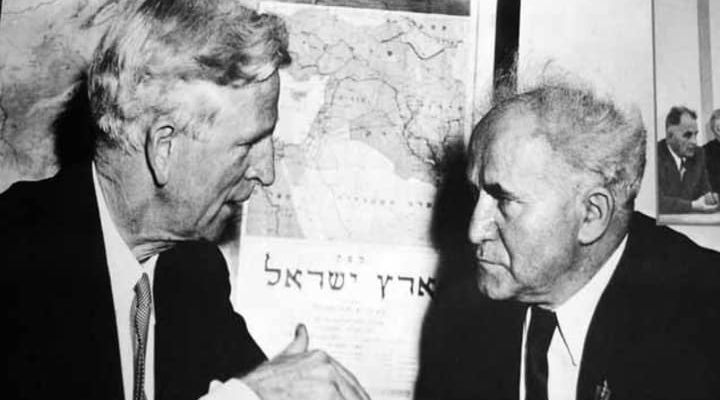 The 29 historians this week wrote to U.S. Holocaust Museum director Sara Bloomfield to protest the omission of the late James G. McDonald from the museum’s new “Americans and the Holocaust” exhibit.

McDonald was an American scholar and diplomat who helped secure U.S. visas for at least 2,000 Jews fleeing the Nazis. He also bluntly criticized the Roosevelt administration for its abandonment of Europe’s Jews.

“James G. McDonald courageously spoke truth to power,” the 29 historians wrote this week. “The U.S. Holocaust Memorial Museum should recognize and honor his courage by adding him to the ‘Americans and the Holocaust’ exhibit as soon as possible.”

Ironically, the museum’s director, Sara Bloomfield, sent a letter to Dr. Barbara McDonald Stewart, the daughter of James McDonald, on March 24, 2014, promising that the Museum “will feature him in our upcoming exhibition on Americans and the Holocaust.” (http://wymaninstitute.org/wp-content/uploads/2019/01/Bloomfield-letter-to-Barbara.pdf ). But that promise was not kept; McDonald is not mentioned anywhere in the 5,000-square foot exhibit.

Dr. Rafael Medoff, director of the David S. Wyman Institute for Holocaust Studies, which organized the letter by the 29 historians, said: “It’s sad and disappointing that an exhibit about Americans and the Holocaust does not have one word about this righteous American who helped rescue thousands of Jews from the Holocaust. We hope the museum will yet fulfill the promise it made to the McDonald family to feature him in this exhibit.”

The full text of the letter by the 29 historians:

As scholars who have researched and written about the Holocaust, we are surprised and disappointed that James G. McDonald, who worked tirelessly to rescue Jews from the Holocaust, is not mentioned anywhere in the new “Americans and the Holocaust” exhibit at the United States Holocaust Memorial Museum.

In a 5,000-square foot exhibit, surely room can be found for the man who served as League of Nations High Commissioner for Refugees Coming from Germany and chairman of the President’s Advisory Committee on Political Refugees. According to Prof. Richard Breitman, “McDonald actually helped saved many thousands of lives.” *

As you will recall, you wrote to Dr. Barbara Stewart McDonald, the eminent historian and daughter of James G. McDonald, on March 24, 2014: “Your father’s remarkable story is crucially important to the Museum, and that is why we have published his diaries, included him in our permanent exhibition and will feature him in our upcoming exhibition on Americans and the Holocaust.”

We would be very interested to know why you and your colleagues changed your position, from planning to “feature” McDonald in the exhibit, to omitting him entirely.

Seventy-five years ago this spring, McDonald undertook a remarkable series of lectures, articles, and letters in which he bluntly charged that the Roosevelt administration and its allies had exhibited “calamitous blindness” and “indifference” toward Jews fleeing Hitler; that they had “paid only lip service” and “acted timidly or failed to act at all…they have been guilty of face-saving maneuvers while millions of innocent men and women have been needlessly sacrificed.” **

James G. McDonald courageously spoke truth to power. The U.S. Holocaust Memorial Museum should recognize and honor his courage by adding him to the “Americans and the Holocaust” exhibit as soon as possible.

(Institutions listed for identification purposes only.)