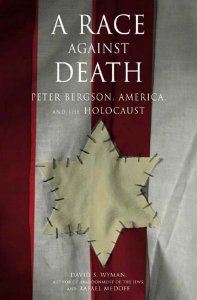 The FBI spied on him. The State Department wanted him deported. The British government sought to silence him. Prominent American Jewish leaders worked to obstruct his activities. Yet despite intense and sometimes frenzied opposition, firebrand activist Hillel Kook (known as Peter Bergson) succeeded in shattering the wall of silence that surrounded news about Hitler’s annihilation of the Jews.

During World War II, Kook spearheaded an extraordinary campaign of public rallies, hard-hitting newspaper advertisements, and lobbying in Congress that forced America to confront the Holocaust. Whether by mobilizing hundreds of rabbis to march on Washington, or by recruiting Hollywood celebrities such as Edward G. Robinson and Eddie Cantor to support the Jewish cause, Kook displayed an uncanny ability to take a long-ignored issue and propel it to the forefront of public interest.

In this powerful book, Kook finally tells his side of this compelling story. Based on previously unpublished interviews, A Race Against Death explores, through Kook’s eyes, the extraordinary events of an unforgettable period in recent American history. It is the true story of one man’s appeal to the conscience of a generation, and his campaign for a moral reckoning in the face of the greatest tragedy mankind has ever known.

This is a chilling account of U.S. indifference to the plight of European Jews during WWII, of how government officials not only failed to act but thwarted the efforts of those who tried. Had Peter Bergson, representing Ze’ev Jabotinsky’s Revisionist Zionists in America, received government support for his plans to rescue Hitler’s Jewish victims, many more might have been saved and his name might have been as well known as those of Oskar Schindler and Raoul Wallenberg. But as Wyman (The Abandonment of the Jews) and Medoff (The Deafening Silence: American Jewish Leaders and the Holocaust) make clear in this simple but potent volume, Bergson’s dogged efforts–advertisements in the New York Times, lobbying in Washington, a star-studded pageant called “We Will Never Die” that toured the country–were crippled in large part not only by Roosevelt’s administration but by the leaders of the established American Jewish community.

The latter were threatened by the Lithuanian-born, Palestine-raised Bergson’s tactics and by his ties to what was considered a radical wing of the Zionist movement. What makes this book an ideal companion to Wyman’s seminal The Abandonment of the Jews (1984) is a transcript of a 12-hour interview he conducted with Bergson as part of his research for that volume. Much-needed context is added by interviews with other players, as well as fascinating letters and papers, including a scathing indictment of the Roosevelt administration’s inaction by a Treasury Department official.

Forecast: Readers interested in America’s response to the Holocaust will find this an indispensable addition to their collection.
Michael Oren, The New Republic
Bergson’s remarkable story has been told by historians and memoirists but never by Bergson himself. That silence has now ended.

Edward I. Koch, former mayor of New York
A superb book….should be read by those who would be armed with truth to fight repeating the infamous past.

Blanche Wiesen Cook, author of Eleanor Roosevelt
All students, scholars, and activists committed to averting another century of war and terror will benefit…remarkable and steadfast research.